I picked up a packet of Hasegawa 1/700th-scale aircraft the other day. The box is QG23-72123 in their range and contains 18 Japanese biplane aircraft models. There are nine Nakajima Type 90 fighters, and nine Mitsubishi Attack Bombers Type 13 Model 2. Delightful models! 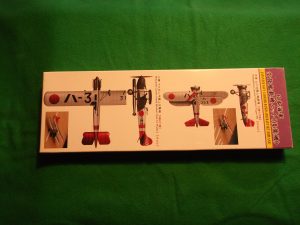 They are small, and so a little fiddly to assemble, but that really only applies to the undercarriage; they are moulded in light grey plastic and make up well. The Torpedo Bomber is particularly attractive. They are, of course, carrier aircraft and intended to sit on the flight deck of the Hasegawa Akagi model, though I’d use them in wargames mode mounted on clear plastic stands.

The pack also includes a very large sheet of decals, roundels and numbers, and I suspect these would be fiddly to fit! 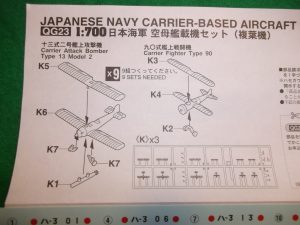 The choice of 1930s biplanes is unusual and useful. The Type 90, a single-seat fighter, of course, became obsolete in 1941, but I believe soldiered on in Manchukuo and parts of mainland China. Only 100 of them were built, from 1932 onwards, and they were armed with 2-7.7mm mgs and could carry two light bombs. They were similar in appearance to the Gloster Gamecock and owed much to the overall design of Boeing biplane fighters. Very little work will create a range of pre-WWII planes of use to the wargamer. The Sopwith Snipe, Gloster Greb, the Hawker Woodcock, Curtiss P-6E (several Curtiss variants, in fact), the Armstrong-Whitworth Siskin, Bristol Bulldog,  Svenska J-6A,  in service with many nations for a decade. The Finnish Gamecock variant had skis, they’d be easy enough to add to this model.

Some 400+ of the 2- or 3-seater Mitsubishi Type 13s were built and they saw significant action over China as bombers carrying two 500lb bombs rather than the single 18in torpedo which the model has. It can be omitted, of course. The type was phased out after 1938, but again soldiered on in remote parts of the Empire. Some were fitted as floatplanes, and it’s possible to alter two of the torpedoes to create this version. Obvious conversion options for the Type 13, well, the Bristol F.2B Brisfit looks promising, and the Italian Breda Ba.25 occur to me at first sight.

Yes! There’s definite potential in this bargain pack of 18 planes for about £5, and the conversion opportunities are many and varied. There are so few biplane models in this scale, and doesn’t a biplane dogfight look fascinating over a table top? None of this high speed, one-shot passing rubbish; the top speed of the Type 90 was 180mph, very sedate.

This entry was posted in Air gaming, Periods - Twentieth century. Bookmark the permalink.