A set of rules developed by Lone Warrior Editor Rich Barbuto has been added to this website. The rules cover the period from the American War of Independence through the War of 1812.

“From Bunker Hill to New Orleans” is on the Complete Rule Sets page.

A long way back in time, in 1971, Airfix Magazine carried a photograph of one of these immensely long-serving two seaters in the World War II camouflage and markings of Goering’s Luftwaffe. A letter followed from C.M. Rice of Devon explaining that the Germans captured a number, one comment suggests around 20, of these sturdy reliable planes from the French Armee de l’Air in 1940, and pressed them into service. Rice stated that photos of these captured ‘Harvards’ are to be found in ‘’Dora Kurfurst und Rote XIII” newly provided with German markings at the base at Goppingen in November 1941.

Given the fact that this aircraft was ordered by the RAF in 1938, and that the last of them flew in South African service in late 1995, and that they appear in a host of films disguised as everything from Zeros to Sturmoviks, I wondered? Could the German, captured Harvards be used in a wargame as clandestine raiders, possibly? They carried bombs often in Greek, Syrian, RAF and other colours. Why not use them as Luftwaffe undercover attackers?  The, I suspect, long out-of-print novel “KG 200”  by Gilman and Clive prods me into thinking this could be a useful solo wargame ploy. I know that the post-war German Air Force employed a large number of these T-6’s in the 1950s, but I wondered if any reader knew more about their WWII predecessors?

Jonathan Aird has taken another look at a Neil Thomas classic, “Wargaming: An Introduction.”

His review is on the Reviews page.

Rules added for a Waterloo game

A set of rules for a board or miniatures game about the Battle of Waterloo has now been added. The rules are by George Knapp and include design notes to explain how the game is meant to work and reflect the realities of the battle.

Posted in Board games, Periods - Napoleonic | Leave a comment

The first sample article for 2021

The first sample article for the New Year from previous issues of Lone Warrior has now been added. This entry is from Paul Le Long and features some of his experiences using the “To The Strongest” rules. He describes his solo experience with the rules, as well as an outing to a gaming get-together that also featured TTS games.

It’s on the Sample Articles page.

The Times is often a source of sound information on military developments, and, in late October, it carried an article by Shashank Joshi, the defence editor of The Economist magazine. Entitled “Attack of the drones shouldn’t kill off tanks,” it considers some recent developments in warfare which certainly have relevance for wargamers. He describes “cheap Turkish drones” mauling enemy tanks and weapons in Libya and Syria, and quotes independent estimates that these drones combined with Israeli “loitering munitions” had destroyed or disabled more than 160 Armenian tanks. The source reports that on one single day earlier in October, in Nagorno-Karabakh, Armenia lost 50 AFVs.

Joshi makes a sound proposition for the capabilities of the new generation of drones, facing expensive, but small fleets of jets and squadrons of armour which are usually designed to take out similar opposition to themselves, and not bat away small hordes of cheap “bugs.” The emphasis is on the fact that air defence remains vital in modern wars, and that size still matters and technology doesn’t always substitute for mass.

Losses are a big problem for the sleek modern army and air force. Drones, of course, being expendable, are inevitably produced in large numbers. The article writer makes two interesting points: First, in 2018, Norway lost the frigate Helge Ingstad in a serious collision with a Maltese tanker off Bergen. The strength of the Norwegian frigate fleet was reduced by a fifth. Cost of repairs is given as $1.4 billion. He also states that no US soldier has been killed by any sort of enemy aircraft since Korea, and that no Western army has faced a credible aerial threat for decades. Mortars have been far more of a threat.

An interesting article, and one which certainly gives food for thought in wargames terms. I actually have a “drone army” but it’s purely Science Fiction, and vaguely based in a scenario centuries ahead, not one happening this very week on the borders of Europe.

Does anyone know of a modern warfare rule set for drones?

What vehicles are out there?

Wargaming in eras after World War I requires vehicles.  Each decade, the variety of vehicle types increased.  Deciding which types to include in your battles is one issue.  Another is where you obtain the vehicles.  This brief post compares Airfix plastic, Matchbox, and Corgi vehicles.  The scale of the figures should, of course, match with the scale of your figures.

The vehicles shown in the photos are placed with Airfix 1/76 figures, but Airfix 1/72 look about the same.  The first picture shows a Corgi Tiger tank.  The second picture is a Corgi halftrack.  The third picture is two Matchbox Humvees.  The last picture shows an Airfix plastic tank.  Assembly was required on the last one and, of course, I messed that up.  The Corgis and the Matchboxes are metal.  The Corgis have the highest level of detail.  They are handsome vehicles.  The Corgis shown were only $12 because I bought them on sale from Amazon.  This is affordable if you do intend to build a large army.  However, if you do not watch for sales the price of a Corgi can be prohibitive. 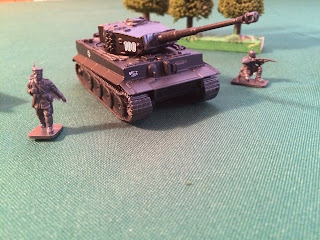 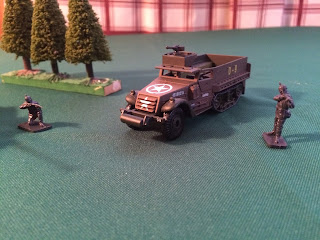 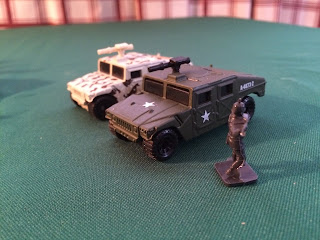 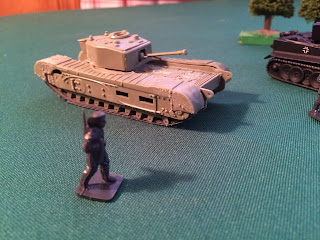 A link of possible WWII interest

Quite a number of the publications I write for frequently contain notes about articles in other journals and newsletters which may prove of interest or value to that society’s membership. Here’s one which I thought should be mentioned to SWA members.

The Ordnance Society is probably well known to many wargamers across the world. It publishes a useful quarterly newsletter, and an annual journal. In Volume 27 for 2020, there’s a very interesting article by Terry Gander, it will certainly appeal to World War II gamers. “Nebelwerfer,” between pages 79 and 87, deals with the development and the deployment of German field artillery rockets in WWII. Illustrated with more than 20 photos and drawings, it gives a sense of perspective on the use of these awesome weapons. Several of the photos are new to me, and I certainly had no idea that the Waffen SS had, in 1943, developed a Nebelwerfer system based on captured Somua half-tracks. In addition, Terry Gander provides some intriguing technical information, which provides the wargamer with a few thoughts on the deployment of these beasts.

The Ordnance Society is at:

A new link has now been added on the right side of this page under Of Possible Soloist Interest. It’s a link to a web site that connects to old copies of Donald Featherstone’s classic Wargamer’s Newsletters, which were published from 1962 to 1980.

The newsletters provide a fascinating look into the history of this hobby and the thoughts of “The Don,” one of the founding fathers of modern wargaming. Enjoy!

The Table of Contents for past issues of Lone Warrior has now been updated to include contents for 2020 and the first issue of 2021.

They’re on the Back Issues and Tables of Contents page on this website.