“Play it again, Sam” is a familiar line from Humphrey Bogart in the old Casablanca movie. Well, it kept coming to mind as I was thinking of replaying some of my old games.  Eventually, the “WWI Aerial War Game” surfaced as one of the most memorable. I went to the “Back Issues and Tables of Contents” index in the LW Blog and found the game listed in 2004’s Lone Warrior 145 issue. I found my copy of the magazine and looked up the rules. Then I went to the storage and dragged out a couple of boxes labeled WWI Paper Airplanes. Bingo! I had found my aircraft and was ready to play after penciling in a 2” square grid on a light blue piece of poster board. 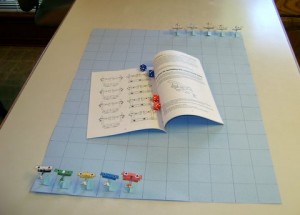 The rules were simpler than I remembered. No changes were made except for the addition to each side of an airplane bearing black and white markings. The leader of the German formation was flying a red Fokker tri-plane so he was dubbed the Red Baron and given +1 on his firing die roll. The French plane with the black and white markings had an emblem on the side that identified the pilot as a French ace.  Although he was not the leader of his formation, as an ace he received a +1 on his firing die roll as well. 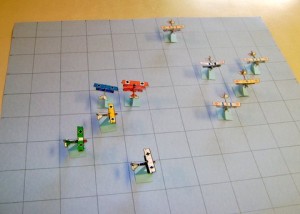 The Germans break for the French planes.

The planes were set up on the board and the Germans moved first. Both sides jockeyed for a favorable attacking position during the first turn. The German yellow plane was shot down in the second round and was soon followed by the German green plane in the third. 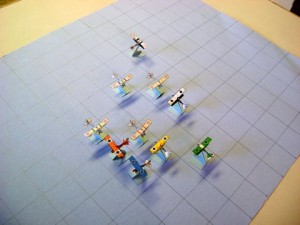 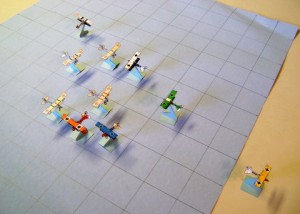 The Germans lose the yellow plane. 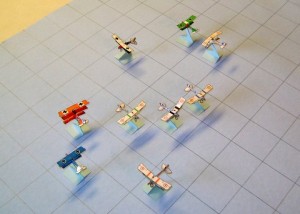 The planes swarm about, looking for an open shot.

Planes continued to mill around looking for targets of opportunity. They were allowed to pass through a square occupied by another plane, but they were not allowed to stop on an occupied square. Some pilots began to cut their throttles to approach their targets.

The Red Baron and the German blue plane evened the score in the fourth round by knocking out the French blue and green planes. In the fifth round, the French yellow and red planes also went down in flames.  The French ace was alone now and completely enraged. He exacted his revenge by taking out the Red Baron. Although the German planes were numerically superior, without their champion their attack faltered during rounds six and seven. 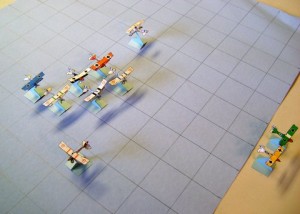 After two losses, the Germans strike back. 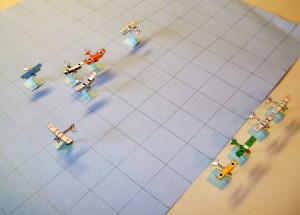 Now the two sides are even again.

The French ace seeks revenge on the Red Baron.

Outnumbered, the French ace threw caution to the wind and dove into his opponents. Rounds eight and nine belonged to the Frenchman. The last German plane fell out of the sky streaming bright red flames and oily black smoke while the French ace flew into the sunset victorious. 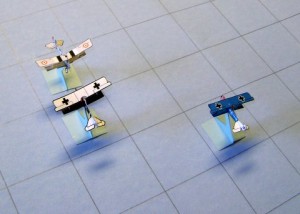 Is the Frenchman brave or just crazy? 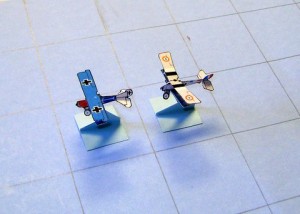 The French ace will score another kill and claim the victory.

That was a good game. It could have ended either way and it took less than two hours to play even though I stopped to take photos. Playing it again was a good idea. What will I play next? “Fighting Rules for Sailing Ships?” “Migs and Sabres?” Oh, well. I will decide that when the time comes.

Lone Warrior magazine is printed in black and white, so the models included in the article were not colored. If anyone wants to play this game, documents are attached with the colored plane models and the stands. The stands should be printed on light blue cardstock paper, cut out, and the printed lines turned inward before gluing. Individual pages of colored cardstock can be found in the scrapbooking section of Hobby Lobby or Michaels for less than $1 each. The colored models should be printed on white cardstock, which can be bought at Walmart in packages of 150 sheets for about $5.

Here are the model airplane stands.

Elmer’s white glue should be used for assembling the stands and models because rubber cement dries out in a couple of years. If they are printed on cardstock, the models should last for a long time. A wooden toothpick can be used to apply glue to small places.

If you don’t have a Lone Warrior magazine collection to refer to, don’t worry, you can buy individual issues in .pdf format very reasonably. Check it out in the section listed as “Back Issues and Tables of Contents” located below the blog heading. And, if you play this game, do beware of the Hun in the sun!

I am a retired high school teacher living in Texarkana, Arkansas, USA. Although I enjoy wargaming in all periods, my favorite eras are WWII, Colonial, ACW, and Napoleonic. I enjoy making rules that are simple, fast, and fun.
View all posts by mike crane →
This entry was posted in Air gaming, Periods - World War I. Bookmark the permalink.