In 1943, the Kriegsmarine needed a host of  special attack weapons for use against Allied shipping in short-range operations in the English Channel. Three types were designed and built, the “Neger,” some 200+ of these; the “Marder,” around 300; and “Hai,” of which only a prototype was completed. The first two were virtually identical: a single pilot, a 21” G7e torpedo underslung, a range of about 48-50 nautical miles, and a speed of around 4 knots. The Marder, being an improved (!) version, was slightly longer and could ( allegedly) dive safely to about 30m.

The earliest examples, of the Neger, were surface boats operating awash, and the plexiglass dome was secured from outside. A few of the earliest had no dome at all. In effect, the craft were piloted torpedoes carrying torpedoes. Real suicide weapons. 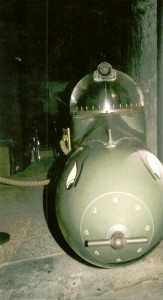 The example is described on a nearby wall panel as a Marder. It’s in the Fortress Naval Museum at Brest and recessed, with no access, so there may be damage. The cramped nature of the weapon is obvious.

As far as wargaming’s concerned, these craft are remarkably easy to build. In 15mm scale, all you need is a see through Perspex bead, for the dome, with a pilot’s head and shoulders below. You can buy beads like this at a toy shop, a sea base about 50 or 60mm long, trailed behind it, and painted to show agitated water and that will do. In smaller scales, say 1/300th for the excellent Skytrex range of coastal warships, or 1/600th for the Triton’s and Tumbling Dice models, then simply acquire some clear plastic headlights from 1/72nd scale vehicle kits, or from model railway suppliers will do. Based as before. You can even use the port-holes from ship kits.

If you prefer metal models, then Mick Yarrow Miniatures make some excellent generic 1/3000th subs, and the smallest of these, if the ’con’s filed off, and replaced at the bow, will represent a Neger or Marder. In 1/1200th use a pin head on a short length of plasticard, say 5mm for a sea wake.

In wargaming terms, well, they were used extensively. First, off Anzio in April 1944, about 40+ craft were in action from K-Flotilla 175. There was a night battle of some vigour, with US sub shasers, and 4-6 Negers were sunk, and one captured intact. Allied losses were described as “two small craft.”

Actions off Normandy post D-Day were intense, and in early July an attack of 26 craft succeeded in sinking two minesweeping sloops and this resulted in a change of Allied tactics with patrol vessels dropping depth charges regularly on their outer defence lines, but there were successes. The Polish cruiser Dragon was severely damaged and later sunk as a breakwater blockship. A British minesweeper was sunk the same night, 7th July. The more efficient Marders were in action by August 1944, and there were some very interesting night battles, in which the Allied surface craft fired everything imaginable at shadows when on 3rd August 50 Marders attacked in company with some explosive motor boats . Allied losses, though few, continued — at least one destroyer, and a couple of support vessels — but by September the sea conditions brought any but isolated sorties to an end. There were, however, some actions in the Mediterranean. During Operations Anvil and Dragoon, there were about 30 Marders involved and again the Allies had to fight hard to find and to eliminate them! The sorties of the human torpedoes continued up to January 1945, and some of the Marders were taken across to the Adriatic for use there.

Losses of both types in both theatres were heavy, as much as 80% for the Marder. They were a real threat to the Allied invasion fleets, especially the stationary heavy units bombarding shore positions. A game involving a host of these mini subs targeting a battleship or cruiser defended by a patrol line of MTBs, with chance cards and a substantial number of possible errors, on both sides would make for a good solo game. Don’t forget that the major focus of the Neger attacks off Normandy was the old Free French battleship Courbet used to bombard coastal gun positions. She couldn’t be sunk, not because of the failure of the attack craft, as many as 30 at any time, but because she’d been scuttled and sat on the shallow bottom for stability and as a breakwater off the British beaches. She was hit by at least two torpedoes.

It’s a very different solo game, and not only surface craft, but patrolling fighters, weather conditions, darkness and even the effects of the wake of high-speed light warships can be a factor.